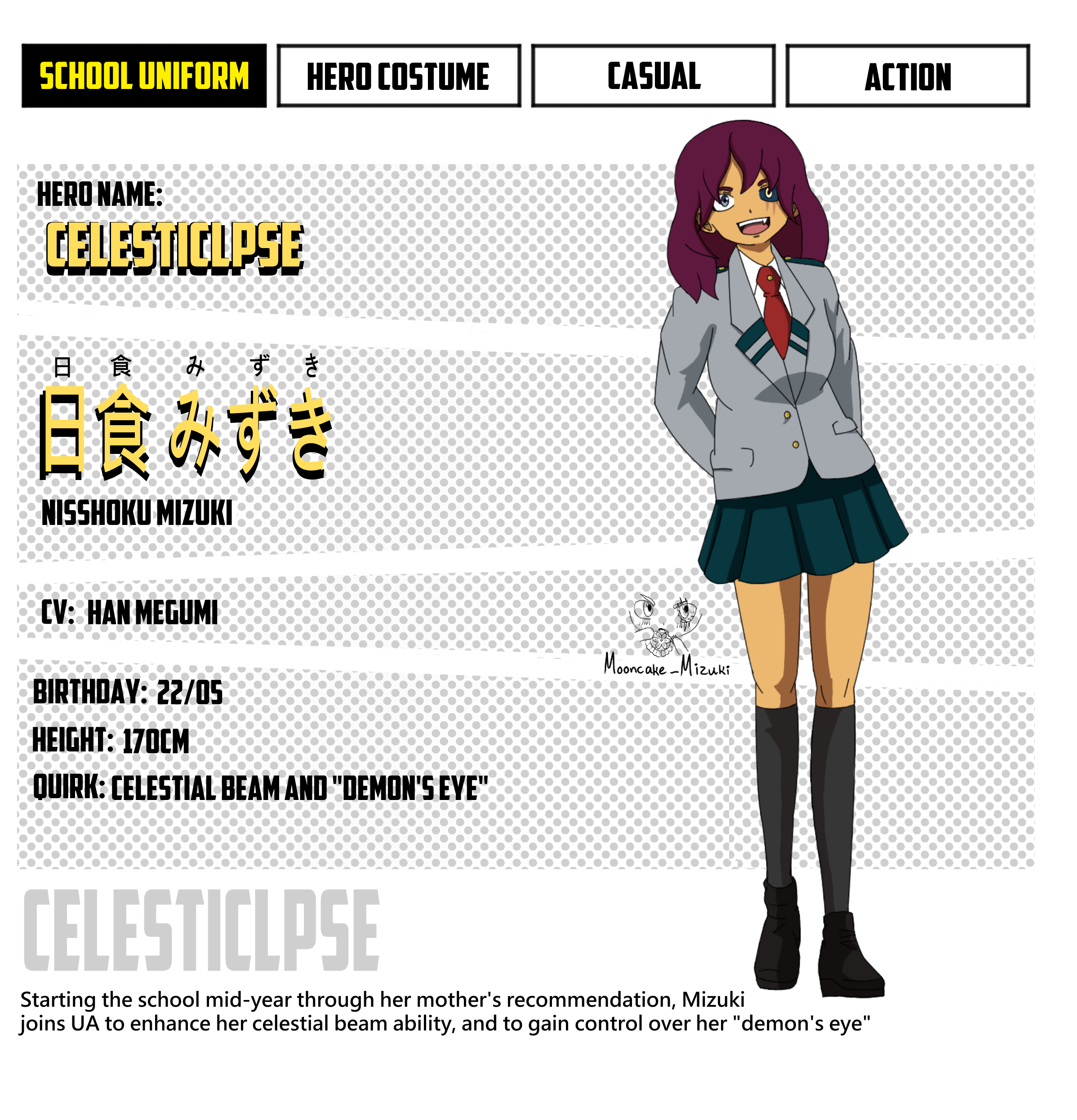 So I have multiple quirk ideas that I'll be sharing when I'm free, but as in the midsts of trial exams right now, for today I just want to share the quirk(s) that my OC has as two seperate ideas for players.

Quirk description: User can shoot celestial beams out of any part of their body including soles of feet, palms, and for advanced learners, places like the chest and back.

Quirk tips: Body must be exposed to generate beams! The only exceptions are specific equipments that help with the quirk's ability.
To create a stronger, more focused beam, user should use equipment such as lensed shoe soles and glove palms; this could be a form of "level up" if you will when the player enhances their skill enough.

Quirk pros: User is able to shoot beam from practically anywhere, so if captured they could still attack.
The power also makes for very strong martial arts moves, such as more extremely powerful kicks and punches.
As it is a beam, the user can fight long and short ranged.

Quirk cons: It can use a lot of energy; this quirk draws out energy from within the body and outputs it into powerful celestial attacks, thus overuse can result in feeling faint or nauseous.

Quirk description: At close contact, the user is able to break the mind of the person they look at, temporarily mentally paralysing them. The effects last up to 8 minutes before the enemy comes to again.

Quirk tips: This quirk can be put to good use if used on enemies that require holding back more than others (e.g., use the quirk on Dabi to prevent yourself from being burnt alive whilst you or one of your teammates sneaks up on a more focused enemy such as Shigaraki or a Nomu), but can be unstable so should not be abused.

Quirk cons: Can't be thrown at enemies left and right; there is a limit of 2 enemies max, as beyond that, the mental paralysis begind to affect you (e.g., say you paralysed 3 enemies, that's 24 minutes of slight mental paralysis for you (hallucinations, dizziness, migraines)). Also, as mentioned before, this quirk can be unstable, so be wary of who you look at! Suggest an eyepatch or long fringe...

I'll post some villain quirks when I'm next free!! Plus Ultra ✊🏽

Okay so today I wanted to suggest a quirk that would be for an NPC in all honesty, as it's too OP for a regular player to have. I created this particular quirk for a villain, 'Raconteur' , AKA Kurai Monogatari, who has a verbal quirk that alters the current circumstance.

Quirk description: Any story Raconteur tells comes to life; this quirk makes him practically invincible, as he is able to control the whole playing field whilst others can merely try to escape his stories

Fighting style: Mixed; he can either be in the same room as the person who's circumstance he's manipulating, or simply know where they are to be able to make the quirk work, but it requires a lot more focus

Quirk tips: [none to give]

Quirk pros: Posessing this quirk means any move your enemy makes towards you, you can simply counter with a change in the "storyline"; e.g. Midoriya goes to attack with OFA - "But what he didn't know, is that there was a giant aligator right in his way!" *aligator appears*

Quirk cons: The way to defeat the user of this quirk is to find the loopholes in his storylines; Raconteur tends to overuse a lot of the same plots, just with different settings. Once you figure out what happens next, you can find an opening and a way to defeat him.
Raconteur keeps a bottle of water next to him to prevent his throat from running dry. If he runs out of water, his throat becomes dry and he can't speak properly; you take away his water, you take away his voice. If put in game, this could be a mission: dodge the objects from the story he's telling and retrieve the water.

Okay so I should be preparing for my final exam, aka, something that'll help me get into animation university - but NAH! Quirk explanations instead, right!? These next quirks I'm gonna talk about are my mutant children's quirks - and Mizuki's squad (the...Mizusquad?).

First up, Kazama Tamashī (just want to randomly note, all of my characters names are surnames first, btw)

Fighting style: Aerial and close range; the user of this quirk can use their aerial abilities as a means of transport, to rescue falling civillians and strong flight and lion leg combo attack. The lion legs also work as a means of on ground combat, as their kicking strength is extremely useful in battle.

Quirk tips: For an ultra powerful combo attack, the user should use the strength of their lion legs and aerial speed to attack an enemy from above; kind of like dropping a very heavy rock at the highest point possible onto an enemy - a cannonball, I guess.

Quirk pros: Easy to get around the city thanks to flight abilities, high speed, high stamina, large amount of strength

Quirk cons: Despite the wings being good for transport, the weight of those hefty lion legs can weigh you down and cause fatigue if in the air for too long

Quirk: Faun - half goat, half human

Qurk description: Goat legs allow the user of this quirk to have amazing speed and leg strength, allowing them to jump to great heights because of this. The user also has some other slightly goaty features - such as goat horns, nose, pupils and teeth.

Fighting style: Close range; the user of this quirk will have to be close to their enemy to land any attacks, as it relys solely on leg power and use of taekwondo

Quirk tips: I suggest you practice working on leg strenth in quirk training; as this quirk is all about legs, you will want them to be at their max strength - don't skip leg day! HOWEVER, the character I created for this quirk does happen to carry a little crossbow with her due to the risk of her legs becoming weak; I suggest if this quirk becomes an option in character creation, they allow you to pick a weapon as well.

Quirk cons: Because this quirk is only focusing on legs, over-using them could lead to fatigue on the battlefield and even rendering useless if you don't have another way of fighting

Quirk description: When the quirk user lifts up their arms, they pull back the string of the bows that are within their torso, reaching right up for full strength, gripping both hands together. To release the arrow, they simply T pose. The user can also adjust the strength depending on how long they reach upwards.
The bows that are inside the quirk user aren't able to be felt, and only become visible when read to aim; as for the arrows, they're a bit like Momo's create quirk - made from his own muscle lipids.

Quirk tips: As mentioned above, this quirk works best long distance - it would work well as a stealth mission quirk if the player could practice their accuracy.

Quirk cons: However, the fighting style can be a little slow if not well trained (having to be completely accurate and all) and unless you have a lot of muscle mass or at least a decent amount this quirk can be a little risky.

Welp, that's all for now folks! The rest of the Mizusquad and perhaps even Manah after I graduate!

Quirk description: Ken'ichi can pull out his teeth - which are already naturally sharp (think Kirishima) - and mould them into weapons, such as swords and daggers. This is not a permanent state, however, as they eventually grow back after a couple hours. As his arsenal is made completely out of teeth, he is required to have a large calcium intake so that their enamel does not break.

Quirk tips: Player needs to have a good dental care routine; Ken'ichi drinks a milk and calcium shakes, so perhaps if there was a "real world" vibe to the game (eating, drinking) the player could drink calcium rich drinks as a power up.

Quirk pros: A natural supply of weaponary, and one that is easily concealed

Quirk cons: If he uses too many teeth and too many of them break, he has to wait many hours until he becomes useful again (although in game, this should last around 2- 5 minutes at most, just to be fair to the players)

Fighting style: Close range - though it is possible that once she trains her quirk well enough, she could spread the seeds from her pores across a greater distance.

Quirk tips: It is best to learn some hand-to-hand combat in order to make yourself less vulnerable when facing the enemy - that way you can also give the element of suprise when you release the spore attack.

Quirk pros: Slows the enemy down due to how uncomfortable it makes them, allowing for the more powerful quirk users to take them down.

Quirk cons: Without something like hand-to-hand combat to back her up, Takeko is rather vulnerable on the battlefield - hence why she's in support.

Quirk description: At close contact, the user is able to break the mind of the person they look at, temporarily or permanently mentally paralysing them - depending on what mood he's in. The temporary effects last up to half an hour before the enemy comes to again.

Fighting style: Close range and hand-to-hand combat; Manah is a sadist so prefers everything more hands on.

Quirk tips: None to give - Manah would be an NPC in my opinion, unless he became a playable villain, then he's practically got the same advice as Mizuki with her "Demon's eye", only more violent and less sympathetic.

Quirk pros: You are able to mentally manipulate those who challenge you, and if they defy you they can suffer the consequences.

Quirk cons: Despite it all being fun and torture, there is the little migraine in the aftermath, which is never fun.